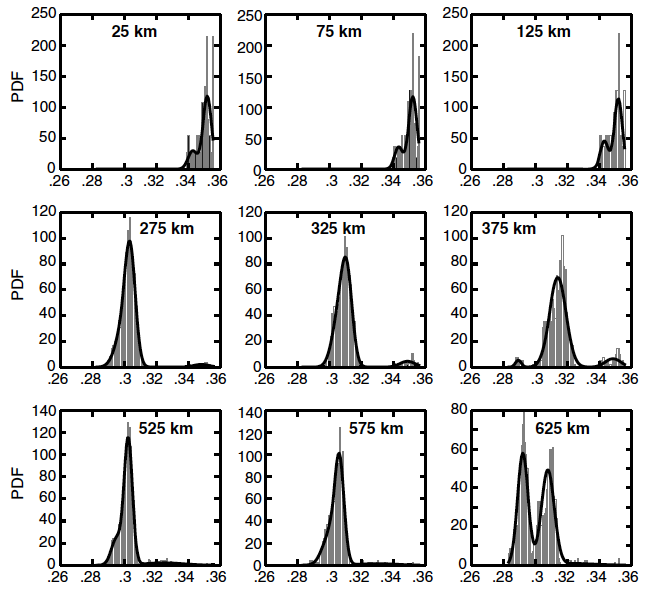 Determining the source location, or associating detections of infrasound signals, is made complicated by the need for time‐dependent information about the characteristics of the atmospheric medium through which the signal travels. The wind and temperature have a strong influence on the propagation of the wave, and these physical properties can vary significantly spatially and temporally (Garcés et al., 1998; Drob et al., 2003, 2010). Of particular importance for association and location is to have some constraints on the celerity (horizontal distance from source to receiver divided by travel time of sound wave) and the back‐azimuth deviation (bias in the recorded back azimuth at an array due to wind). If one could model the celerity and back‐azimuth deviation for a given observation, one could in principle determine the precise source location and origin time using the observed arrival time and celerity to obtain the range and the back‐azimuth deviation to obtain the azimuth. A major challenge in infrasound monitoring is to model the celerity and back‐azimuth deviation in such a way that the uncertainty in the atmospheric specification at any given instance in time is accounted for. This is particularly pertinent to detecting, associating, and locating global infrasound sources using the International Monitoring System (IMS) infrasound network; a global network including infrasound arrays for verification of the Comprehensive Nuclear‐Test‐Ban Treaty with 60 total (47 currently installed) infrasound stations (e.g., Christie and Campus, 2010; Nippress et al., 2014). Having a set of prior information for a given area can aid in determining if one can expect detections at a certain azimuth and distance from a source and provide constraints on the characteristics of those detections. In addition, having information corresponding to previous atmospheric conditions can be used to improve source locations. For example, the use of physics‐based modeled priors (Marcillo et al., 2014) and data‐based priors (Nippress et al., 2014) to constrain celerity values at specific distances and azimuths from the source improved the location precision over use of a uniform prior distribution when implemented with a Bayesian location algorithm (Modrak et al., 2010).

Because location precision, as well as detection and association of detections can benefit from parameter information based on previous atmospheric conditions, it would be preferable to always use such parameters. It would be tedious and time consuming, however, for the user to have to generate a set of prior parameter values for each new event analyzed. Here, we develop sets of priors for celerity and back‐azimuth deviations (examples for back‐azimuth deviations are not shown due to a lack of adequate ground‐truth data for validation) at many node locations around the globe that can be used not just with the IMS network but any smaller scale networks located near the node locations as well. In addition, we develop a set of attenuation priors to be used specifically for work with the IMS network. For a specific user‐specified research location, the celerity, back‐azimuth deviation, and attenuation prior distributions can be used from the nearest global node.